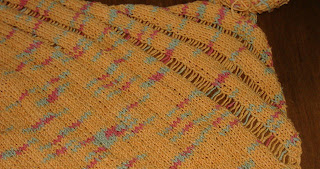 I'm making progress. Slowly. Someone should have warned me of how monotonous it is to knit the Clapotis. I'm not saying it's a bad pattern. It's actually quite well thought out. It's just than once you hit the middle stretch it gets pretty repetitive. And if you're like me and count stitches every row, pretty soon you've put yourself into a trance. Or more likely you've realized that a nap is the most important thing you want to do right now. But I'm getting there.

Originally I had planned to make this a very long shawl. I have lots of yarn. I don't think I'm going to do that now. It'll be just fine if I make it to the pattern dimensions. 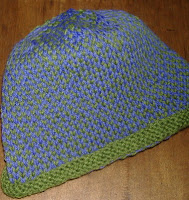 We had the largest turnout for Dulaan knitting that we've had in weeks. I finished this hat earlier in the day but I forgot to take it for show and tell. In fact, I forgot all the hats I've been accumulating. That, in spite of the fact that I had put them right by the front door so I wouldn't forget. All too common anymore.
Posted by Larry at 8:40 AM

I guess this is the moment to confess that Clapotis was one of the most tedious things I've knit in a long while.

I decided to make a scarf version pretty much just to use up a multi-coloured yarn I didn't know what to do with.

That said, it's also the one project that gets the most comments, hands down. I doubt I'd be interested in making another, but I'm glad I've done it once.

Remember my Clapotis disaster with the Fiesta silk chennile? It's now sitting in a bag somewhere in my office wound back into balls. It's such a beatiful finished project (if not done in chenille by someone who isn't used to it), but not as fun to knit as I thought it would be.
Yours looks beautiful, and I can't wait to see it in person!

I have to start to assemble all of my Dulaan items over the next week or two. I like to mail mine out around June 1 since it's going quite a long distance. I still want to churn out four pairs of plain child socks (thank goodness they're small!) out of leftover sock merino. I think I have a mitten to finish, too. (If all else fails, and I don't finish in time I'll send them some place else or save them for next year.)

Looking forward to the Neatby class tomorrow! There's another one in the afternoon, but the four of us who are going together just signed up for the morning. My friend, Nova Knitter, is going to both. This is my first time taking a knitting workshop, so I am quite excited. I don't do anything that doesn't involve the kids, so it's nice to get away for even half a day.

Have a great weekend!

I like the colors. It's really not very orange, although I thought it was initially. Hey, I think my readership needs to increase; I think I'll lift my embargo on publishing my blog so as you can publicize my mother's day post.