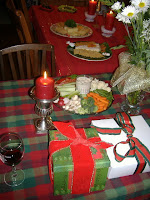 The Thursday Knitting Group Holiday Party was a lot of fun, even if a certain nameless person forgot that he had promised to bring a potato casserole and didn't come to the party. His present from me is still in my car, waiting for me to decide if I will keep it for myself, or give it to someone else, or, if said person is contrite enough, I will give it to him. I don't really need another gorgeous hand knit scarf anyway.

There was plenty of delicious food and excellent wine. And two luscious desserts. Both of which I had to have. Mendy's peach glazed pork tenderloin was fantastic. (Maybe it was apricot.) Mario brought his justly famous Risotto Pie which is actually a main dish, not a dessert. Thom's traditional broccoli salad, Renee's corn pudding, also not a dessert, Estelle's butter steamed green beans, so crunchy and bright, and Judy started us off with some crudités followed by the Salad Diane that Susan brought. Lammia brought her tiramisu and I made a chocolate trifle. Normally I wouldn't write about all the food but I just wanted to let those folks who didn't show up know what they missed. 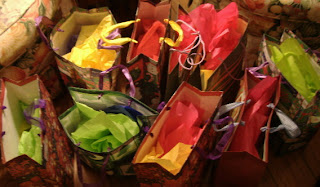 After we had overindulged or gorged ourselves we played the gift exchange game. You know, the one where you draw a number and then get to select a gift that you might or might not get to keep. I got some wonderful Colinette Iona Print and Prism that is still in my car waiting for me to take its picture. And then there was a major yarn destashing provided by Lammia. (Where does she get all that yarn anyway?) My haul is likewise still in my car. 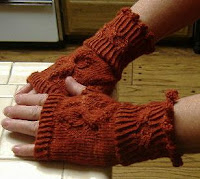 Even though I remembered to take my camera I didn't remember to take very many pictures. But I did remember to take a picture of these fingerless gloves I made for Susan. They were a major hit. You can get the free pattern here. Look to the right and you'll see her free patterns. This one is called Kyla. One skein of Koigu with some left over. The bauble edging is unusual but makes sense once your actually get started. I had a few knitting mishaps while making these mitts but they had nothing to do with the pattern. Just my failing eyesight and trying to knit in poor light.
Posted by Larry at 6:32 AM

Oh, Jesus, I think I gained a pound just reading about all the food you had! :o) I had home made Tiramisu as my birthday "cake" this year. Thinking of making it again for Christmas Eve, this or Raspberry Triffle. Anyway, as I said on ravelry, the mittens are cute in this color. I hope your friend Susan likes it!

Oh all that food sounds wonderful and yummy. Obviously you had a lot of fun which is the way it should be when getting together with knitterly friends. I cant wait to see what goodies you got too, they sound great. The gloves are beautiful.

They have been a major hit all day today...I have had not less than five people ask me about them. THANK YOU for the thoughtful gift. What a great time we had.

The party sounds wonderful...good food, good compay and great gifties. Too bad for those who didn't show...more for the rest of you. Heh. ;)

Oh what a haul! and what a table! What luscious friends.

why are you all so far away?

Boy am I sad I had to miss it... (although the parade was nice, especially a couple of very cute marchers... well, Darcy rode on a "float")...

I'm an awful person with an even more awful memory. You know I've had my gift yarn for months. I was sick when Mendy called. I needed a reminder email or call!!!

Just found your blog the other day - I love it. Also, I must confess to stealing a photo from you because I forgot to take a picture of some plain red mittens I made for one of my blog friends. I hope you'll forgive me.

Did I mention that you are awesome?

Sounds like a great time! Desserts are my downfall.