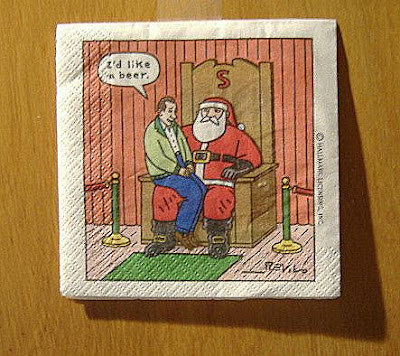 I'm almost done with my holiday knitting. Finished, temporarily, another scarf last night. I made one of the scarves from One Skeinbut I don't like the cables at the end. They're supposed to be mirror images but mine don't look so hot. I'll look at the scarf again tonight and them decide if I want to reknit that part.

There's still a pair of socks that and 75% done. I'll work on those today while I'm at A Stitch in Time. I have to find that second skein of Jitterbug just in case. Next up is a pair a gloves and a ribbed hat.

I don't have a wish list other than the books I've listed on Amazon. I like surprises and I can't think of anything that I want. Some Addi lace needles would be nice. I also like nice soaps. I think I'm pretty easy. I still have two people to buy for that I have no ideas of what to get. Other than that I'm done. Well, there is the wrapping.

Thanks, L, for the funny serviettes.
Posted by Larry at 7:45 AM

Are at least some of the books you want at Unravelled? Inquiring minds want to know!

That napkin is too funny -- that's what my husband would like for Christmas, I'm sure! Well, probably a flat would be more like it.