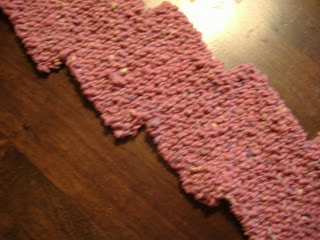 This isn't the scarf I had intended to start with. But sometimes things happen. In this case I stumbled upon some Tahki Soho Bulky Tweed that had the same stitch gauge and almost exactly the same yarn that the Tilting Squares scarf called for 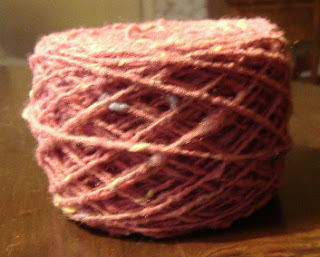 so it seemed like I should go with it. I've had this yarn for probably twelve years. It's still available but not in the color way that I'm using. Typically, I can't get the color right. It's actually a lot more mauve/plum than what you see here. 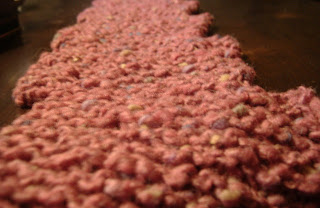 I like it. It's a bit difficult to knit though. It's quite lumpy, like they just lined up a bunch of wet wool balls and stuck them together. There's a manufactured rusticity to it that works well with this simple design.

I also finished the Maizy Anklets that I started a couple of weeks ago. Crystal Palace Maizy is one of the most frustrating yarns I've ever worked with. It splits and snags plus the dye came off on my hands and totally changed the color of the bamboo needles I used. If you decide to try it anyway, don't say I didn't warn you.

I like the way the colors spiral but they're totally different in how they do it. There was this knot in the yarn about seven rows into the knitting. So I ripped and cut off the knot and started over. That may have caused the change but I'm not sure. It could be just another thing about the yarn that I don't like.
Posted by Larry at 8:09 AM

I am going to have to knit one of those, it is really neat! Guess I will have to break down and buy another scarf book!!
Mendy

The scarf looks very unusual, but in a good way. I will have to keep an eye out for that book. I really like the socks, and it sounds as though it does the same thing to bamboo needles as the denim cotton does too.

I thought you might be interested to know there’s a knitalong for Knitting New Scarves. You can join at http://knittingnewscarves.blogspot.com/