Can you see the cat hair? 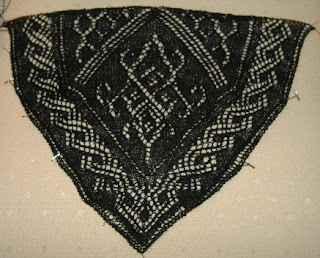 Okay! So I finished the second set of clues yesterday. I know it doesn't look much different from yesterday but it is. So I have until Friday sometime to work on other projects. In spite of my complaining about this project I am enjoying it and looking forward to the next set of instructions. The complaints have nothing to do with the pattern. They're all caused by me.

The a/c repair guy showed up right on time. Except he didn't bring an extension ladder so he couldn't reach the a/c from the outside. He didn't anticipate that he'd need a ladder even though my condo is on the second floor. He's been here before is his guise as hot water heater guy. So he'll be back next Tuesday which means I won't be able to go to Unraveled for my weekly fix of knitting with C and S and P and L&H. I'm happy the weather has cooled since I'm not supposed to use the a/c even though it has a bit of freon still. Using it could cause the compressor to burn out and that would mean we need to get an entirely new a/c.

In more interesting news, we're going to Alamitos Bay Yarn Company today. It's our second annual Harbor Cruise. Last year's trip was so much fun that this year we had filled the boat even before we made the announcement to the whole group. You snooze; you lose. Or in this case, if you don't show up for knitting group you miss out sometimes on all the excitement. We might be able to schedule a second trip if there's enough interest. I hope the sun comes out while we're there. Doesn't look too likely right now but it's still early.
Posted by Larry at 7:45 AM

Have fun - I'll be sitting at my desk being jealous!

Congrats on finishing clue 2. It's kicking my butt. The rebel in me won't allow me to use a lifeline. I guess I have until friday to knit, and then unknit, and knit some more! Yours is looking Great!

Your mystery stole is looking great. It's nice to see it in black, too. Have fun on the cruise!

Oh it must be so much fun to see what comes next as it unfurls off the needles. I gave long consideration about joining that KAL but then I'd remember what July was going to be like for me and decided not. But I love watching yours as it grows.

We had a lovely 1/2 inch of rain on Tuesday - which knocked out our library internet - but I got it back up again by late yesterday and now I have at least half time IA. And it's blessedly cooler.

Where are those hurricanes?

Knitting on those Christmas socks but thinking of you on your harbor cruise.
hugs

Looks wonderful! You have infinite amounts of patience.
BTW, I tagged you for a silly thing that's going around. Check out my blog for the details. If you don't wanna do it, it's okay. I rarely do these, but this one got me out of the summer doldrums for a bit.
xoxoxo