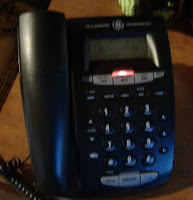 See my new phone! Isn't it nice? It only took me two trips to Target to get it right. I should pay more attention. I forgot to check when I got the first one to see if it had an answering machine. That's the only reason I needed to get a new phone. The old answering machine quit working. So a second trip was necessary. It has an answering machine and I managed to program the few features that I will actually use. It was a lot easier than I was prepared for.

Minnie asked me why I wanted a corded phone. It's pretty simple really. I like living in the last century. I hate the look of the new phones. You notice this one is black, the way phones used to be. My last phone was white and I never liked it. The new phones are just too cluttered. Too many things going on. The one I got is bad enough. I used to have a wireless phone and it caused me lots of grief mostly because hackers could use it to call China and Japan. But really I don't need all the stuff the new phones can do. Anyway, if you want to call and leave a message I have an answering machine again.

People who know me well know that I don't like seafood of any kind. I cringe just thinking about it. When I buy my Healthy Choice TV dinners I only buy chicken and turkey. Usually two of each kind. I should have paid more attention when I went to the market last week. Someone had mixed the garlic chicken and the seafood combo and I got one of those shrimp/chicken with rice things. I ate it because there wasn't anything else. I didn't want to get dressed again to go and buy something else. That's the same reason I ate five jalapenos for lunch. I didn't have anything else at home for a salad.

I did manage to KIP on my Spanish Dancer shawl yesterday without forgetting or misplacing any of the decreases. But then I was paying more attention than usual.
Posted by Larry at 7:45 AM

There is another safety reason to have at least one cord phone in a residence.

Cordless phones must be plugged in to an electrical outlet in order for the base unit to transmit to the handset. If the power is out, you cannot make a call.

Your phone must plug in to an electrical outlet, in order to operate the answering machine. You should test it to see if the phone works if it's not plugged in.

In earthquake country, the possibility of no power and the need to make an emergency phone call is real. Everyone should have at least one old-fashioned phone in the house, even if it's just a spare stored with the emergency supplies.

Here's another reason. My cordless phones often have a slight echo in the sound quality. When I am going to have a serious conversation, I always use my corded phone. Newer isn't always better.

i'm not a fan of all the fancy phones either. We have one old fashioned on in my daughters room, and it's the only one which works, if there's no electricity. Looking forward to your finished Spanish Dancer! ;o)

I still have a land line wall unit with a dial!!!

i do have one corded phone, for the reason that debby mentioned. also, if you're ever placing an order over the phone, the credit card is more secure over a corded vs. a cordless phone. the cordless i am currently using frustrates me though, because it is just short enough i can't prop it, and do things two handed. could be worse, i suppose, iget to have fur elise as a ringtone.

and you and my 14 year old would get along well. he is a chile head as well. FIVE? my heartburn aches just thinking about it!