Back to our regularly scheduled program 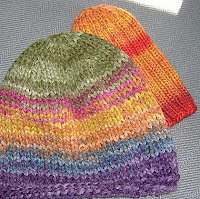 The shawl is done and suitably admired. Time to move on to something else. I've been using the Dulaan project as sort of a filler for the past week. A couple more hats and some others on the needles. But I really need something bigger. So it looks like I'll be doing this.

I've seen it a couple of times but didn't make up my mind until this morning when I was moving stash around and came across some yarn that I think will be perfect. I have to work up a sample yet, and find the rest of the yarn, but I think it'll be a good use for some yarn I haven't any idea why I bought. Must have been the 50% off price from when Temple City Knits was going out of business the first time.

For those of you who thought that was my yarn stash in yesterday's photos. That's only the part that doesn't fit into the yarn room. The yarn room is undergoing major renovation right now. I'm trying to clear out some old stuff that I don't think I'll ever use. It'll be hard to say goodbye to some of it. I need to go get some more plastic tubs for the stuff I'm keeping. At least they'll stack better than the cardboard boxes.
Posted by Larry at 8:56 AM

Oooh. Love the color in both of those hats! Very fresh and fun.

Not even a hint as to the yarn chosen for the new shawl? :(

Clear boxes--be sure you get clear ones! (I am the queen of clear plastic tubs. Yarn. Fabric. Better in clear!) That shawl looks rather interesting--but hmm, 541 stitches? Might need to get out that 60" Options cord! Will be fun to see what you pick--I have something that I think might work, too!