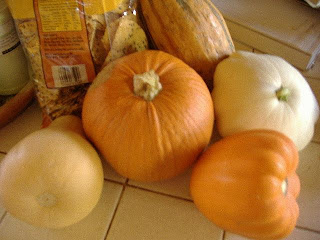 When my friend Robert brings home fresh produce from the market he usually arranges it in a basket on his kitchen counter so he can enjoy it while it's waiting its turn. I don't. My kitchen counter is too small as it is. But these squashes and the pumpkin are just too colorful and lush to be hidden away in the refrigerator. It's a lot harder to arrange these things than you would think. They keep rolling around. I liked it better when I had just taken them out of the bag and put them on the counter.

Lisa's friend JC (not that JC. This is a different one.) has been sending over fresh vegetables for most of the summer. Green beans, tomatoes, various squashes and even some exotic eggplant. This is probably just about the end of the bounty.

So where was I? Oh, yeah. Knitting. I'm just about done with the first sleeve of the brown cable sweater. Since the other one is already started I might still get this done by the end of the week. I'm home all day today and tomorrow, except for Thursday night knitting, so there's plenty of time, if I just don't get distracted by the new blue lace shawl I started on Sunday night. More about that another time.
Posted by Larry at 9:53 AM

Wow, such a lot going on with the knit group. Today is first day with internet access!! Have a wonderful day at the fair and at the knitting destashing tomorrow night.
Mendy