The party's over, more or less 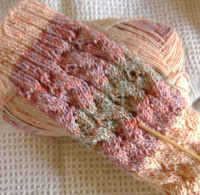 Now that the festivities have calmed down a bit I've been getting back to my knitting. I haven't started anything new though. I have a couple of pairs of socks that I'm working on. And I'm still trying to get somewhere with the Kureyon sweater I'm making for myself. This pair of socks is called Stanfield 196 and is from More Sensational Knitted Socks
by Charlene Schurch. I had seen other stitch patterns in her two sock books that were Stanfield something or other. I didn't know what that meant except I more or less concluded it was a reference to a stitch compendium. Then I read about the Stanfield books when I was messing around on Ravelry. I'd never heard of those books. So now I have something to add to my next wish list. I'm using some Sockotta that I got one day when I found myself in a yarn shop and had no knitting project to work on but I had some dpns. 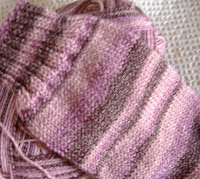 The other pair is Plain Vanilla. This is my go to pattern for when I need a simple project for when I'm at work or am socializing. I think it was originally called the 56 row sock. It's the one I started with a long time ago and it's still one of my favorites. Although I think Plain Vanilla doesn't do justice to vanilla. Sorta makes vanilla sound like something bad. I like vanilla, especially ice cream, and I like the color as well. Anyway, I'm using some yarn I got at the Trash to Treasure event we had at A Stitch in Time last November. There was no label so I'm not sure what the brand is but it's really nice to work with.

I don't have a picture yet of my sweater progress. I'm still working on the second sleeve. I haven't done either of the body pieces though so I'm not a far along as it sounds.
Posted by Larry at 9:58 AM

Ooh those socks look so nice. I would have thought the second pair look more like Cherry Ripe socks, chocolate and pink together.

These socks are so pretty. I like the Stanfield pattern as it suits the yarn you have chosen well.

Oh I love that Socotta yarn in the top photo. One of the prettiest colorways I've seen.