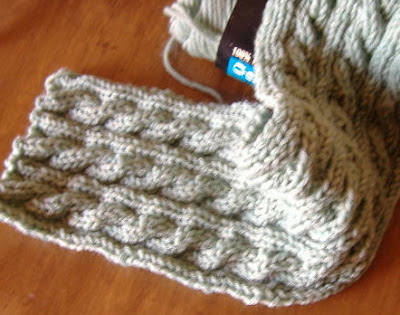 Yesterday I had planned to spend some time on my Palindrome Scarf. I'm enjoying the knitting as it's fairly mindless and given the weight of the yarn and the needle size it's growing fairly quickly. I'm using some really old Brunswick Germantown. I got this yarn some time in the mid '90s. It was supposed to be part of a Kaffe Fassett coat. That didn't happen. This is the kind of yarn that makes people think they can't wear wool. It has a slightly coarse feel and is stiff. I don't think anyone makes Germantown anymore. And I'm pretty sure Brunswick is out of business or has been absorbed by some other company. At any rate, I haven't seen the brand anywhere.

So, after going to the market and starting a load of laundry, I sat down to knit. But my eye was attracted to these socks. 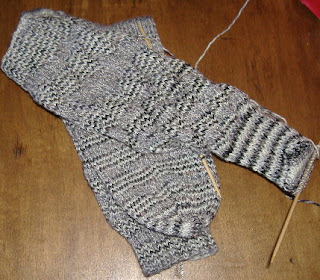 I knit the first sock sometime last year. I don't know why I put them aside. Oh, yeah. I needed to see them tried on before I finished the toe. Anyway, I decided I really was more in the mood for small needles and tiny stitches than for cables and large needles. I finished the leg and the heel. I'll spend some time with the gusset today before I go to my knitting group this evening.

The photo is kinda burned out. So here's a somewhat better idea of what the yarn really looks like. 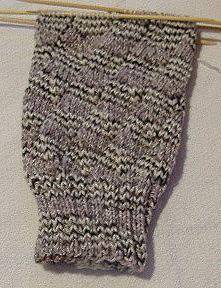 I'm using Tofutsies from Southwest Trading Company. It's all very nice except it does split like anything so you have to keep your eye on what you're doing. And there have been knots and broken strands in the second half of the skein.

But I have to make some brownies first.
Posted by Larry at 8:12 AM

I'd like to make this scarf one day, but am sure to use a very soft yarn, nothing scratchy. I don't like Tofutsie for the reasons you gave. I have one skein in my stash, started and ripped socks twice. I think I'll keep it for times, when I run out of any other yarn. ;o)

Splitty yarns are a pain in the caboose, aren't they? At least it sounds as if the Tofutsies are more pleasant to knit with than the Noro.
I'll think good jury-duty-no-no-mojo for you--I'm still not healed up from my escapades in that parking lot!

Oh so glad to hear that you are knitting on socks again after the last ones didnt turn out how you would like. I really like the pattern on those ones, and the scarf looks great too.

That is a fascinating sock pattern! I'm always looking for good sock patterns with nice vertical lines. Can you share the name of the pattern?

I started a pair of socks with bamboo yarn, and I find that really splitty. Definitely have to watch what I'm doing. It's soft and knits up nice, though.