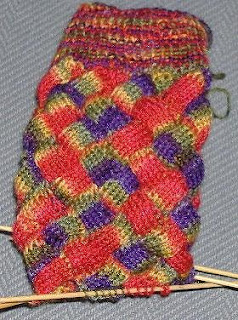 For the first twenty five years of my knitting career I avoided making socks. I'm not sure why but it was probably partly because I was afraid I wouldn't be able to do it. So I just said socks were not something I did.

Then, about seven years ago, the demand for help with knitting socks began in earnest. So I got a book, Folk Socks by Nancy Bush, and taught myself the basics. I still reference that book a lot as well as Charlene Schurch's Sensational Knitted Socks. Not that I don't have lots of other sock knitting books. But those I use mostly for patterns. And I do find bits of helpful information in other books and on-line, of course. 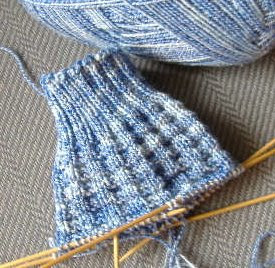 I can't get enough. Here are a couple of my currently active sock projects. You will probably recognize the Annetrelac sock from IK's Holiday 2007 issue. I'm having some problems with it. I managed to mess up on the final round of triangles and in trying to fix that problem I dropped some stitches. And it got worse. I may end up ripping back to the ribbing before this is all done. I'm using some Schaefer Anne that was gifted to me a few years ago. I like the colors but I'm having problems seeing some of the stitches, especially in the dark purple areas.

The other sock is a newish pattern on Ravelry called Harris Tweed. It's pretty easy and straightforward. The Sockotta yarn doesn't have much give so it's a little hard on these tired old hands. But at least I can knit these socks while I'm working. I should be able to fix any inevitable errors without too much fuss.
Posted by Larry at 6:48 AM

Love th blue socks. The entralac socks look very difficult to knit. I dont even knit very many patterned socks although I have a few books which are a great help. Perhaps one day I will do more intricate patterns. I do hope your first sock turns out all right for you.

I really love doing entrelac now that I've taught myself to knit backwards! Of course, I still don't love to knit socks, so those won't be going into my queue, but there may be some baby socks coming up one of these days. Just because they would look so cute on Little Missy A! At least your projects are "cool" in every sense of the word! (And I do love Schaefer colorways!)

Ooo! July is sock month for me too. I'm so intrigued by those entrelac socks though I might just be tempted to start another pair....