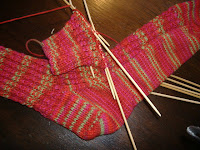 When I first started to teach knitting on a regular basis I didn't really know as much about knitting as people thought. I'm pretty much self taught, except for a few friends I made along the way, using whatever books or patterns that I liked. I had never knit a pair of socks, for example. I just knew the basics. But I'm pretty good at figuring out what a pattern is trying to tell me.

So over the past few years I've really worked hard to expand my techniques and to get to know more about how to do stuff. I really get excited when there's something new to figure out. Not all patterns are created equal and the number of errors in printed patterns seems to be expanding exponentially. Errata pages seems to go up almost as soon as new books are published. Pity the new knitter!

On the other hand, it's not always necessary to follow a pattern exactly. But one does have to be careful when making changes. And always make notes of what you did. The socks in the picture are ones that I started almost a year ago. I'm using a stitch pattern from Sensational Knitted Socks
by Charlene Schurch. I had put them aside for several months. When I picked them up again I thought I knew what I had been doing. After I had completed about half of the gusset decreases I realized I wasn't using the stitch pattern I had started with. I had to rip back to before the beginning of the heel flap and reknit. Well, I'm started on the second sock now and I'm pretty sure I'll get these done for this year's holiday season. All I have to decide is who's going to get them.

I have to admit that it was pretty tempting to just trash these socks when I discovered my mistake. But, like I always tell my students, if you knit you will rip. And they seem to like it when I make mistakes in my own knitting.
Posted by Larry at 8:37 AM

oh, how this makes me SMILE!
My class is knitting socks from that book,
and i ALWAYS learn something new
when someone comes in with a (valid)
question ;)
Learn something new everyday,
that's MY plan....
xoxoxo
Greta

Ohhhhh what a yummy colorway!!!
Mendy

There are no truer words. LOL! It's totally inevitable.