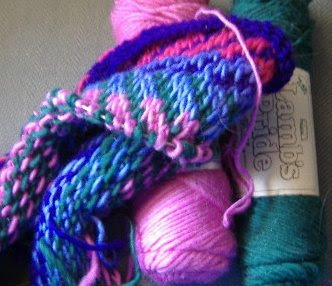 Taking a break from the mittens. The first one is totally done and I've cast on for the second. So I'm taking some time out to start the Kiki Mariko Rug from the latest Mason-Dixon book. I have been pressed into service to participate in a KAL. A small one. Only two people.

It took me three tries to get started. Once, not a long enough tail for the cast on. Second, cast on with the tail instead of the working yarn. Third, I discovered after eight or nine rows that the work was twisted. I think I've got it this time.
Posted by Larry at 9:13 AM

It looks like you're off to a good start now-too bad you had so many practice runs :-)

I'm at the halfway point on my rug and loving the way it looks. Have fun with your project.

I love hearing that you make such me-type mistakes sometimes... On the other hand,it looks like it will be lovely when it's done....

FYI, my computer at home has died - I don't know yet whether it can be revived - so I'm on my work email only now..... arrghghgh.

Woo hoo! We're on! The colors look great. I made 2 of the 3 mistakes you mentioned too, so don't feel bad! Where are you knitting today??