It happened again. Another virus! I'm apologize to everyone who got that stupid email. I have spent the last six hours getting rid of the virus. I hope no one got burned.

Knitting is not happening all that much right now. No motivation and I've been reading a lot. But I'm going to my knitting group tonight, so there'll be at least a few rows on the cardigan I started last November.

Thanks for sticking with me.
Posted by Larry at 2:11 PM 4 comments: 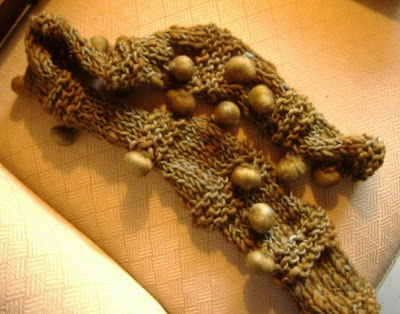 What we used to call novelty yarns are now referred to as fashion yarns. Well, I don't see how you could call this yarn anything but novelty. It's about as playful as any yarn I've ever seen. From Pagewood Farms U-Knitted Nations, it's called Giant Purls. 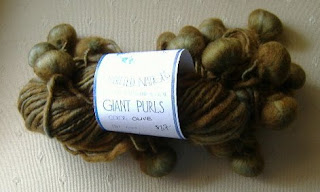 Here it is in the skein. 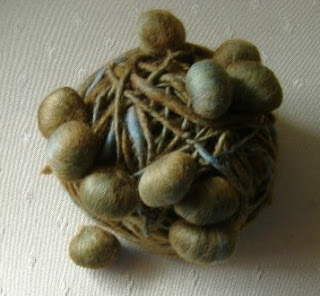 And here it is in a ball. Wound by hand, very carefully. This is pretty close to the actual color of the yarn. 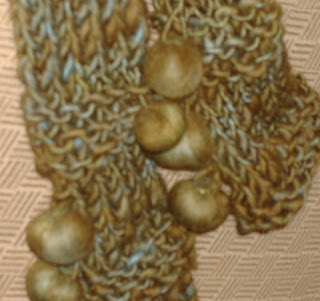 And a close up.

This was an easy Sunday afternoon knit. Maybe a couple of hours once I got it into a ball.

Trust me. I've already heard all the witticisms about knitting with balls.
Posted by Larry at 4:28 PM 3 comments: 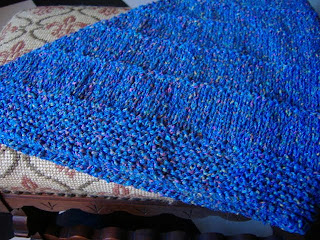 Man! Thanks some bright blue! It's no where near the color of my latest rendition of the Westknits' Boneyard shawl. 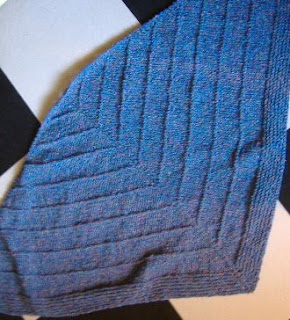 That's not quite it either, but it's closer. 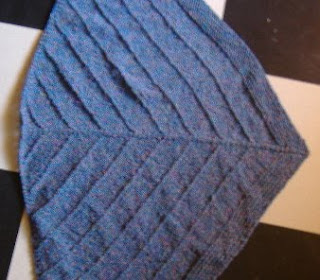 It's more like this. Maybe a little brighter but still this one is the best I got from several attempts.

This is Rowan Summer Tweed in a now discontinued color. I used four skeins. I had planned on using all six that I had in stash but the shawl was getting big enough and I was truly tired of working with the yarn. It's stiff and unyielding. Every stitch was becoming an ordeal. So I'm done.

I do like the finished product though and I'll be starting another one sometime soon.

I just found out that I've won both Westknits books in the Selfish Knit-a-long that the Westknits Ravelry group held during the month of February. I'm really tickled. I've had Book 2 on order since late January and it hasn't shipped yet. So I cancelled the order. I have Book 1 but only as an e-book. Now I'll have hard copies of both books.
Posted by Larry at 4:37 AM 2 comments:

I'm at the end, I hope, of the first cold I've had in years. Just the coughing and tissue consumption left. Maybe by the weekend I'll be over it. I worked Monday but probably shouldn't have. Hope no one caught anything.

But I have been knitting, some. 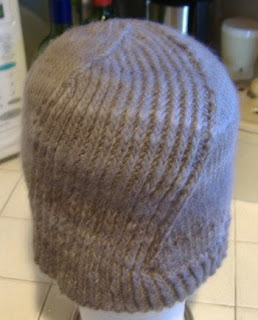 This is my Windschief hat. It's a Stephen West pattern. I really like his designs. This one comes with a pattern for a cowl using the same motif of twisted knit stitches. The yarn is Noro Retro, two skeins. I've wanted to knit something with this yarn for a long time. I'd use it again but probably knit it on a larger needle. I used a 7US but the yarn calls for 9US. Anyway, the hat is done and I'm back to working on some WIPs.
Posted by Larry at 12:05 PM 4 comments:

Practically more of the same

Things are pretty quiet around here. I don't have much to report. I'm going to be working at Skein, where I used to teach before I moved to A Stitch in Time. I'll be there today, tomorrow and Saturday (2/16, 2/17 & 2/19) in case anyone wants to stop by for a lesson or a visit. 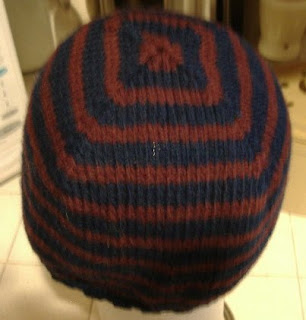 I'm still knitting hats, among other things. This one is my fourth or fifth Turn A Square by Brooklyn Tweed. I used some scraps from some very old Reynolds Paterna. I guess they don't make it anymore since I couldn't find it anywhere on-line. I used to have a lot of it but some local moths started using it as a drive-thru. This was all I managed to rescue. I really like this pattern. I've yet to make it in anything like the original yarn. 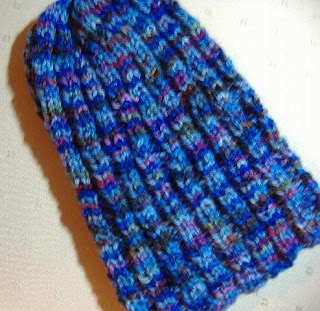 I also knit this ribbed hat using some Colinette Iona that I recycled from a beret I was making. I realized I wasn't going to have enough yarn to finish so I frogged it and made the ribbed hat. This is another yarn that no longer exists, according to their website. I didn't read the pattern very carefully so I worked a 2X2 rib instead of 3X3. That meant I had to create the decreasing at the top. It worked out just fine. I didn't get a final picture, one with my daughter wearing it, but it looked really cute on her.

I'm still working on the latest Boneyard shawl as well as the cardigan I started back in November. The rows are long so progress is slow.

Did you know that the groundhog doesn't actually see or not see his shadow? The whole thing is decided weeks in advance by a committee. It's true. It must be. I read it on the internet.

This is so wrong. First, Santa Claus, then the Easter Bunny and now the Groundhog. I'm so depressed. But I hope that committee was right. All this crazy weather needs to end and "they" said he saw his shadow so we only have six more weeks of winter. Or was it that he didn't see his shadow. It hardly matters.

But that isn't what I started to write anyway. You know the expression "you have to break eggs to make an omelette." Well, that's what I have going in my house right now. I told you about having to move a bunch of stuff to get to the loom that I was giving away. Well, all that stuff is still stacked, willy-nilly, on the far side of my bed. Or it was. Some of it is now in my living room while I go through each of the bags (there's a lot of them) and decide which projects that were started sometime in the past, are worthy of saving and which ones need to be frogged. Also, which yarns can I comfortably donate or give to friends. The stack of yarns to be donated isn't anywhere near as big as it should be. I'd show you but I'd die of embarrassment.

No pictures of anything I'm knitting. The Boneyard shawl proceeds apace. It's going to be awesome in its tweedy blueness. I've done a few rows on the top down cardigan. That's my Tuesday night simple knitting for when I'm at knitting group. I also have a pair of socks that is only about four months old. The first sock is more than half way done. Pictures soon.

In one of the bags I found a scarf that I started four or five years ago. It's cabled and I used it to practice cabling without a cable needle. Taking a break from sorting, I tried a couple of rows. It was fun. I think I'll go work on it some more.
Posted by Larry at 5:50 PM 4 comments:

I have a small table loom that was given to me by my weaving instructor a few years ago when I thought I might like to weave. It's a hand built copy of a well known brand. It's been sitting, covered, in my yarn stash room for at least five years. As it turned out, weaving didn't really hold my interest.

I've been trying to find someone to give it to and I'm hoping that today will be the day. A friend of a friend is coming by later this morning to look at it. I had to move a lot of yarn and other stuff to get to it. I still have to give is a good dusting. I also have to take the loom part off of the table it sits on or I can't get it through the door.

I found some stuff I had been looking for when I moved the loom. A number of finished pieces that I had put aside for my gift stash. Some more yarn that I couldn't find for a shawl. The second pair of socks I ever knit. I really need to get that room organized. If the loom goes I'll get some more wire cubes and stack them against the wall where the loom was. So I hope that happens. 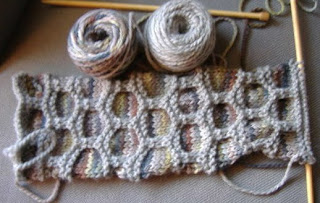 Here's a small project I'm working on. It's a scarf called Bumble Up, a Spud & Chloe pattern. The pattern and yarn to make it were a gift from my friends L&H. It's been at least a year since they gave it to me. I wonder how they knew I'd be switching my color preferences to gray and neutrals. Anyway, the yarn is Misti Alpaca Chunky and it's so soft. I'm using some size 11US/8.0mm needles. I haven't worked with anything that large since the Great Scarf Explosion back in 1999/2000. I've been working on this scarf when I take a break from my other projects. I should be done in a day or so.

Here's my other current project: 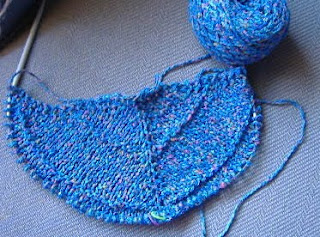 This is my fourth Boneyard Shawl. I'm using some Rowan Summer Tweed from stash. Something I've had since '02. I lost it for a while but found it quite by accident a few days ago. The shawl's quite a bit larger now. I was struggling with the M1 increases. I went to A Stitch In Time and got an Addi Turbo lace needle and that took care of that.

I guess I'd better go dust the loom before it's too late.

p.s. The loom is on its way to its new home.
Posted by Larry at 8:01 AM 3 comments:
Older Posts Home
Subscribe to: Posts (Atom)